There is a park (I say park, what I really mean is that there is a patch of undeveloped land that people lounge about on during the middle of the day) near my house that has recently become a hub of election campaigning. Several days ago, while walking home from town, I noticed a cluster of individuals sitting quietly beneath group of trees. Strange, I thought. That so many people would be sitting so quietly and peacefully in this little park. Usually the park is filled with young boys or youths playing football, or sugar cane vendors shouting for customers (or at the muzungu). But there they sat. Quietly in conversation. The next day I figured out why. They had returned, but this time were all wearing bright yellow shirts and now included a number of bodaboda drivers, also wearing bright yellow shirts, and a few had strapped large megaphones to the backs of their bodas. The trees were papered with yellow campaign fliers. Later that evening the bodas took off blasting music and grainy campaign messages all over town from their over-sized megaphones.

These days, I hear the sounds of campaigning everywhere in town. I hear music blasted from cars and bodas as I lay in bed attempting sleep, I hear garbled campaigning shouted through megaphones as I walk the streets and shop in the markets. Every available surface is wallpapered in various campaign fliers; prospective mayors and women MPs smile down at me from every available surface - walls, windows, trees, fences, garage doors. Young boys in matching t-shirts hand out fliers on the streets and the local Democratic Party office always has its doors wide open, animated discussing escaping into the street.

There are also however more serious signs of next year's impeding elections. I've observed many more of the private security firms (who I don't believe to be officially associated with the Ugandan military) conducting drills and marches and various military-style exercises. It's actually quite amusing to see grown men in uniforms and carrying rifles (next year it'll be strange to again live in a country where seeing a man walking down the street with a riffle is not the norm and is certainly a cause for concern) struggling to understand exactly how to march in two single file lines for X amount of steps, turn in unison and march back. Pure hilarity. Even the children abstain from gawking at me and my fellow "muzungus" to stare unabashedly at the security men practicing their marches.

As of now there's not much evidence that the country will go south before, during or after the elections next February. We will probably be on "standfast" at least, meaning we can't leave our sites. There's little doubt in many of our minds that Museveni, the current president, will win his bid for reelection. Ugandans are, for the majority, of the same mind - very few of them think he will lose reelection either. It'll certainly be interesting no matter what happens!
AT 5:34 AM No comments:

A few months ago I took a few days to do some work for a Danish organization here in town. They had received a shipment of donated eye glasses from Denmark and needed some help organizing them. I went through all 3,000 or so glasses and organized them into their own little boxes by prescription strength. I knew they would be distributed in the village at some point, but since that day failed to come....I forgot about it. To my surprise, an American friend and Child Care worker, Fay, contacted me last week to let me know that the clinic was scheduled for the weekend and would I like to help out? Of course!

I left the project early on Saturday and met Fay at her office. We left together for the village church where the clinic was to take place. Since this is Uganda, we were late. But not really...since you're not "on time" here unless you're late. We set up in the church office and a trickle of people came in throughout the afternoon to get their eyes tested and receive their brand new glasses. Most of the people had problems with reading close up, but a couple needed help with seeing things far away. Most of the villagers who came were women, but a few were men and we had a couple children who had problems reading the board at school.

Since my writing skills seem to be going downhill fast, here's some pictures: 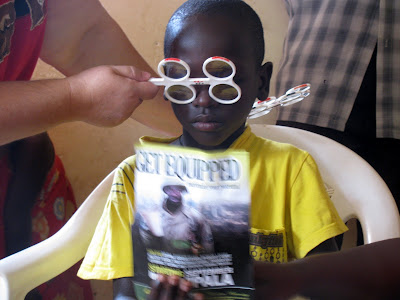 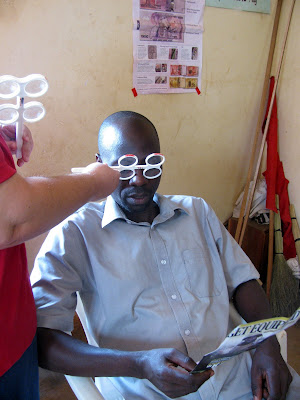 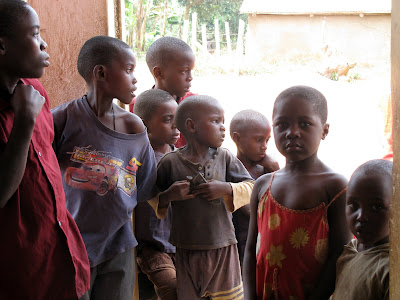 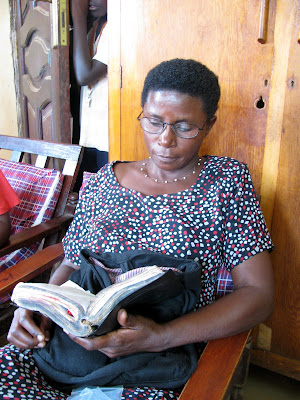 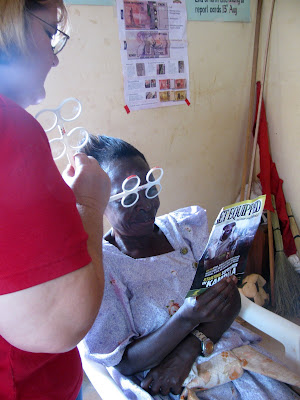 And baby David, who was thrown down a pit latrine when he was just a new born. He was rescued and is now being raised by the same organization. He's now four months old, laughing, crazy ticklish, making all sorts of noises, and wearing 12-month-old size clothes. 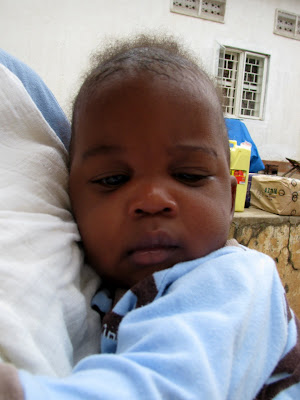