In America, marriage options for a couple in love are simple. First: get engaged, second: get married, either at a church or city hall. Party, optional (but preferred, I mean, come on, who doesn't love a party?)

In Uganda, things go a little differently. In the Buganda kingdom, where I currently live, the act of getting married is a little more complicated. First you have to find a willing participant. As a Muzungu (white), this is surprisingly easy. I've had more marriage proposals from complete strangers than I wish to count. Boda drivers, shop owners, farmers, primary school boys, homeless people, all request the honor of my hand in marriage. Or more accurately it's: "Muzungu! You marry me! We go to America! We play sex! Yes?!" Oh. I'm so honored. I can barely contain myself. I've never been wooed in such a pleasing fashion before!

Once you've found the right partner, then the fun begins. First you negotiate. The groom visits the bride's family and negotiates the traditional "bride price." In many parts of Uganda, the bride price is alive and kicking. Especially in the eastern Karamojong region, the amount the of bride price is very important. Families want to get as much cattle and other goods as they can for their daughters. It's a status thing. The more cattle you can garner, the more prestigious you are. In the Buganda region, bride price is more of a traditional aspect of marriage. The amount of cattle or other goods you bring doesn't really relate to the quality of the girl. Ideally, a groom should bring some cattle to the table, but it's not a deal breaker like it would be in other regions. Here is an essay that goes more into the cultural reasons and matrimonial implications of bride price.

Following the negotiation for the bride price comes the introduction ceremony. For more rural populations, a couple is considered officially married following the introduction ceremony. After the introduction, the couple spends a few days apart and then begins to make a life together and producing children. An introduction ceremony is part drama, part serious marriage ceremony. It's intended to be a lighthearted event, with dancing, music, and good food. While the groom's side shows off its wealth in the form of the bride price, the bride's family is also concerned with appearing as wealthy and well to do as possible. I believe this is partly to do with showing up their neighbors and partly to do with wanting the groom to think he's getting the best deal possible by marrying their daughter. During the first half of the introduction, the bride's female family members (sisters, aunties, nieces, etc) dance out and give little speeches and receive small gifts. During all of this, the groom is "hidden" in the back with his guests and the bride's family searches through the crowed to find him. Once they have found the groom, they bring him to the front, tie a sash on him and only then does the bride make her appearance.

Unlike in America, where the bride usually "glows" with happiness on the big day, in Uganda, like many other cultures around the world, the bride is required to look sad, never letting a smile appear or any hint of happiness. She is sad to leave her family, and should appear as such. She sits, quietly, looking down, sadness on her face. She does not speak until the very end and only sits with the groom briefly before leaving again. Gertrude, however, could not seem to keep her face in sadness; small smiles flashed across her face and you could just feel her happiness and pleasure.

After the bride's family had introduced all its members and fed and watered the groom's side, the time comes for the bride price to be presented. The groom's side all participates in this with the women carrying baskets on their heads, someone bringing in a stick to symbolize the cattle, and all the gifts are arranged before the bride's family. Traditionally, the groom presents his bride with a suitcase filled with clothing and other necessities she will need to start her new life with him. Another traditional gift is that of gomez fabric and konzus to each of the bride's immediate relatives.

After the gifts are presented, the real party begins. Food, music and dancing. The bride's family feeds all of the guests, which is an other opportunity to showcase their wealth. The previous day, David slaughtered one of the cows he purchased for the bride price (or had slaughtered). This was then delivered to the bride's family and I suspect made its way into our post-introduction meal. Typically, the bride's family stays the entire night and parties while the groom's side returns back to their hotel or homes to celebrate on their own.

After the introduction, more affluent families, or more urban (and thus, western) families will also choose to perform a western marriage ceremony in a church setting. In Uganda, however, not all marriages performed in churches are legal. Only a certain number of church types can perform legal marriages. If a couple chooses to have a church marriage, they will also then have a marriage performed by a justice of the peace to make it legal.

And now, some pictures: 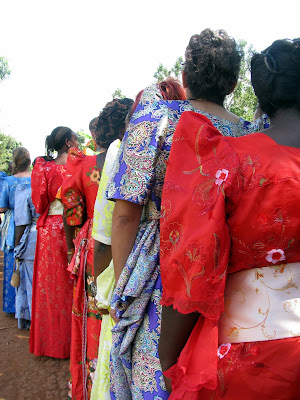 The girls lined up ready to enter the introduction in our gomezi! Looking good! 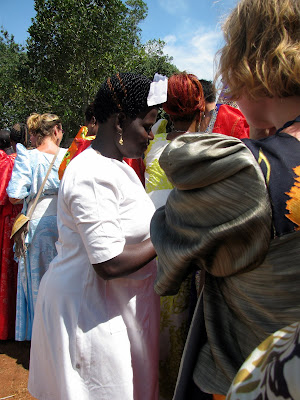 Before we were allowed to enter the introduction, we were "immunized" by several nurses. Our "immunization" consisted of them pinning knitted or crocheted green and white flowers on our clothes. 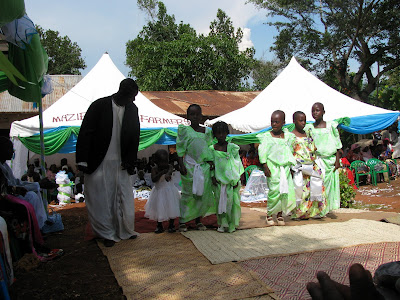 Some of the bride's family being introduced. 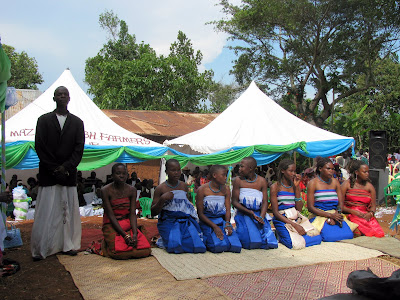 More of the bride's family being introduced. There were probably 5 or 6 groups of women who all danced out and then knelt before the groom's side. In the Buganda culture, women kneel when greeting or speaking to men or elders. 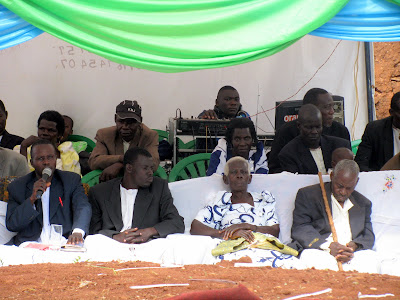 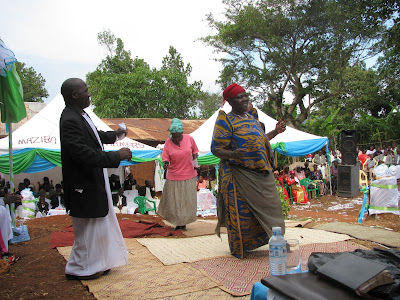 About midway through the introductions, the bride's grandmothers (or jaja) burst into the ceremony in their digging clothes (the one in the front is wearing a digging gomez) and insisted on knowing why they "weren't invited to the ceremony!" They were invited; this was part of the "drama" of the evening. 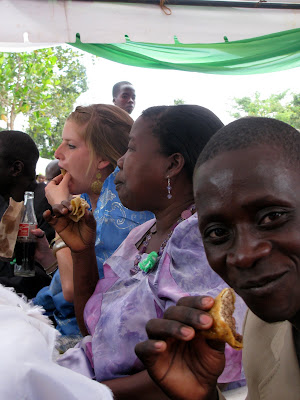 The bride's family fed the groom's family sodas, meet samosas, a boiled irish potato and a chapati during the ceremony. 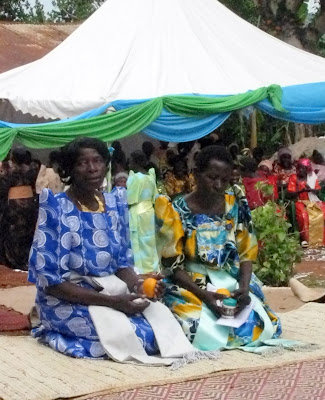 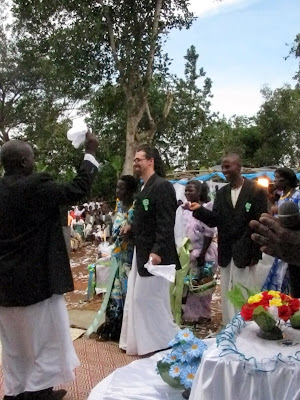 They found him! Bringing the groom to the front after finding him in the crowd. 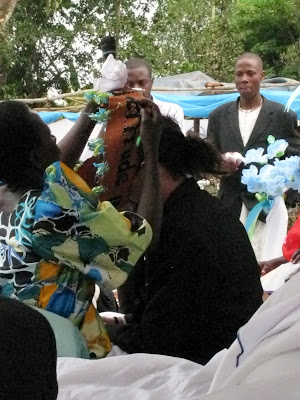 Putting the sash on the groom. It's made of barkcloth, a traditional Buganda cloth. 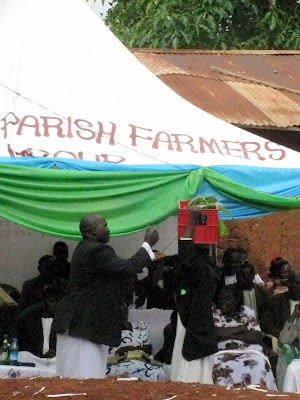 Presenting the bride's family with a crate of soda. 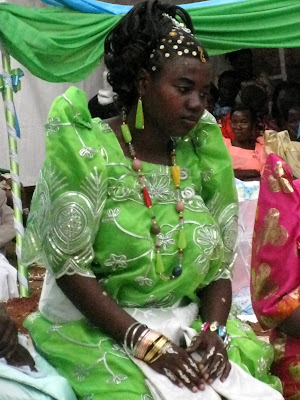 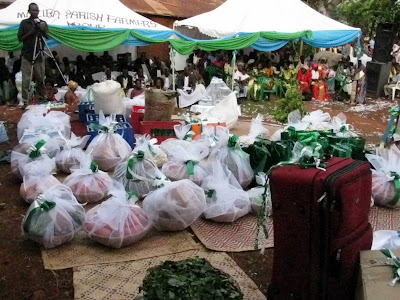 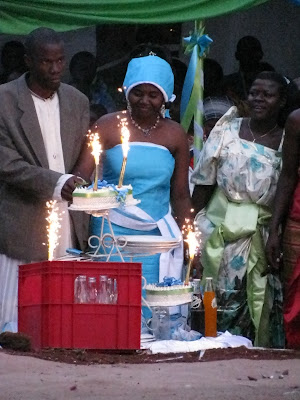 Cutting the cake (with flares?). The groom didn't cut the cake with the bride, it was all her side of the family! 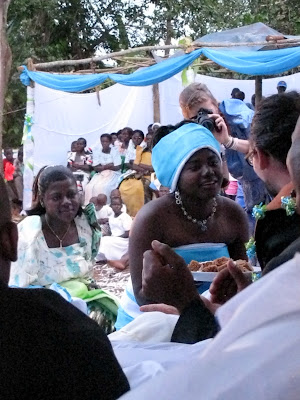 The bride serving cake to the groom and his "sister"
AT 3:42 AM 1 comment: